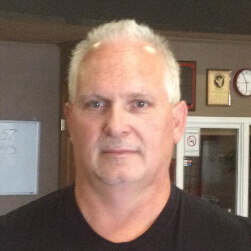 Wayne Burley is the owner and Instructor for C.O.B.R.A. Defense Canton. He has 36 yrs. of experience in defensive tactics instruction. He is a 6th degree master level instructor in martial arts and has been teaching since 1984. Wayne has taught defensive tactics to children, adults and to employees of corporations. He has been a corporate safety trainer for over 25 yrs. He holds a degree in education from Malone College and a Master’s of Science Degree in Fitness Management from the United States Sports Academy. He was recently inducted into the United States Kido Federation Black Belt Hall of Fame.

Wayne became interested in C.O.B.R.A. Self-Defense due to his consulting on workplace violence with companies. He was impressed with the professional approach and the systematic way of delivering the self-defense material to the clients. He discovered that the C.O.B.R.A. approach was very similar to the defensive tactics he teaches to his martial arts students and felt that the two complement each other very well. He found the C.O.B.R.A. Self Defense System is the best system for providing personal safety to all age groups.

C.O.B.R.A. Self Defense is an International organization located in Clearwater Florida that trains individuals to become instructors. C.O.B.R.A. stands for Combat Objective Battle Ready Application. It is a 10-week self-defense academy. You start and finish with the same group and everyone works on the same level. You will participate in real-life scenario training and drills, learning how to handle a real life attack or situation. C.O.B.R.A. is in an academy form. It is a non-martial arts system, which means you will be in street clothes and will not be earning a belt. It’s like a police academy for civilians. It’s a professional program with an emphasis on student safety.

Sign up today and get free access to any of our other classes until your C.O.B.R.A.™ Academy starts. PLUS get a free C.O.B.R.A.™ T-Shirt!